The Carabao (Bubalus bubalis) is often mistaken for a large rock, a puddle with huge horns or a big black road block. Though this swamp-loving domestic water buffalo is found all throughout rural South East Asia, in the Philippines the Carabao holds special status as the National Animal.

There are two main theories about the origin of the Carabao in the Philippines. The first is that they were originally introduced by Malay migrants in 300 BC [1]. Another theory suggests that a species of Swamp Water buffalo from the Chekiang Province of China was introduced in the 1500s [2]. Regardless of the time of their introduction, the Carabao proliferated and current numbers of the Carabao are up to 3 million across the Philippines [3].
The Carabao is integral to the Filipino economy and ingrained into Filipino culture. Economically, the power that the carabao has to pull objects contributes 1.48 million US dollars to the Philippine economy [2]. This is largely because of the importance of the Carabao in the agricultural sector. A benefit that the Carabao does have in weighing half a ton is that they are strong enough for plowing rice fields as well as other crop fields. If they are not in the fields, they can be found pulling lumber and other supplies on carts called kariton (cart) and kareta (sled) [2].
So, why use Carabao? Why not use modern machinery? Unfortunately, many farmers own small properties, have a low income and may not have much economic opportunity [2,4]. Furthermore, some farming is done in areas where machinery would not be able to function because of difficult to access terrain. So, it’s hard to imagine Filipino agriculture without the Carabao intertwined in its fate.
Twice, the agricultural industry was devastated by a decline in the Carabao population. Numbers dropped drastically in the 1900s when disease spread, particularly rinderfest. Another added hardship was an invasion of locusts which damaged the crop that was used to feed the Carabao. The carabao population subsequently dropped by 90 percent. As a result, there was a great decrease in crop yields. The second time a massive population drop occurred was during the Second World War. The Japanese had invaded the Philippines and not only did they confiscate rice but they also shot Carabao as they suspected that they were used to transport weapons for guerilla troops. Again, the population was devastated and crop yields were dramatically affected. 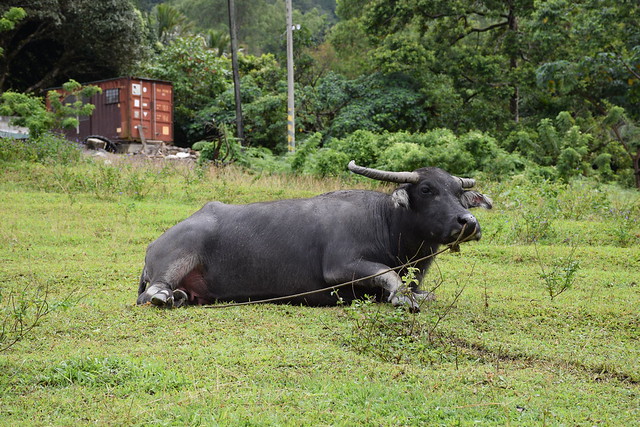 Like the Carabao’s strong and elastic hide, the Philippines rebounded. Today, the Carabao is prolific in the agricultural industry for working in the fields as well as for its milk and its meat, both of which also contribute to its importance in the economy. The popularity of Carabao milk is on the rise and there is even a cooperative of farmers that has been established throughout the Philippines called the “PAC” which focuses on ensuring they breed healthy buffalo and establishing safe husbandry and care practices. [2]
To some Filipino people like Eric David, the carabao is more than just a water buffalo, it is a symbol of the Filipino’s hard work [4]. Similar to the Filipino people, the Carabao is strong, hardworking and resilient. Despite historical hardships, the Carabao has bounced back every time. This goes the same for many people whose lives are dependent on the Carabao and whose hardships are tied with the yield of crops. Despite the animal’s strong frame and its ability to make even lounging in a puddle look carefree and comfy, the Carabao represents the history and strength of the Philippines and its people. It’s no wonder that when you speak to Filipinos across the Philippines that they are proud of their heritage and their national animal.

***If any information is every incorrect or needs to be updated, please let me know! Science is about improving and learning from mistakes!***