Only a few hours out of Kota Kinabalu lies Mount Kinabalu National Park. Famed for the mountain at its center, those willing to sacrifice a minimum of $200 CAD can hike to its glorious peak for several days. For those of us less willing, we are left with the jungles of Borneo.

The jungles of Borneo, however, are magnificent. Nestled at the mountain’s base are creatures and plants that are unique to the Bornean jungle. Or, at least, I’ve never seen them before. Anyone who slows their hike to a crawl can find at least one marvelous Bornean specimen.

For those of you who are curious about plants or fascinated by the jungle, I’ve put together a (not particularly serious) guide to the flora of Mount Kinabalu’s base. However, our dear Bio on the Go thought this might be a tad uninformative, so they have decided to delight us with the True Facts about the jungle (not the alternative ones). These will be found as bolded subtitles.

This is a bit beyond my scope. I did my best.

And so without further ado: the jungle.

Is it hair? Is it a coil? No, it’s a vine! This vine was the subject of many decidedly “artistic” photographs. It looks like wood, and yet it’s actually some sort of vine. I think it’s my favourite thing.

Right! To the best of my knowledge, it looks like a thick woody vine Liana vine. These have gotten in the news recently as their numbers have more than doubled in the last decade and they are believed to reduce carbon absorption in rainforests. This is not good if more carbon is made available as a result of global warming [1]. They grow upwards from a root in the ground, and then use other plants to support them. However, they never parasitize the other plants that physically support their growth [2].

This was not my favourite thing. We were walking through the jungle when we saw this strange worm. We placed it on a stick, fascinated, wondering what it could possibly be. Well, about 6 leech bites later we found out. Leeches were crawling everywhere in the jungle. We did learn, however, via the handy dandy internet (accessible in this jungle) that you should NOT pour salt on a leech. They will vomit into your blood before detaching. Instead, just let it suck your blood and fall off happily.

Leeches are not insects, they are part of the segmented worm grouping (Annelida). They are parasites that suck blood from their human or animal hosts. What’s really cool about them is that they release a blood anti-coagulant to prevent your blood from clotting [3]! They tend to come out after rainfall. If and when they latch onto an ankle, don’t squeeze the leech, it will just dig in deeper into your skin. Use a flat surface like a credit card to get underneath it’s latched jaws, and it won’t vomit into your blood.

Tell me I’m crazy, but these berries look like some kind of complicated atomic

for years for scientists to discover them. Meanwhile Dalton’s the first guy to figure

out atoms and this plant is just sitting in the jungle of Borneo crying out “Me! Me!

I think you just outscienced me…

Seriously, what is this. It looks like a tendril of flame crawling across the wood. It looks deadly. It looks gentle. It looks indestructible. Is it a beetle?

It’s not a beetle. It’s part of the grouping Chilopodia which includes centipedes. They are NOT insects! They are deadly… to other insects. Centipedes are predatory and have the ability to produce poisons (ie. Hydrochloric acid, cyanide, etc.) which can poison prey. But the amount of cyanide is so little that it wouldn’t affect humans except maybe to become an itchy bite. Fun fact, not all centipedes have 100 legs despite their name. On average, centipedes have 40-100 depending on the species! Very few have over 100 legs. [4] 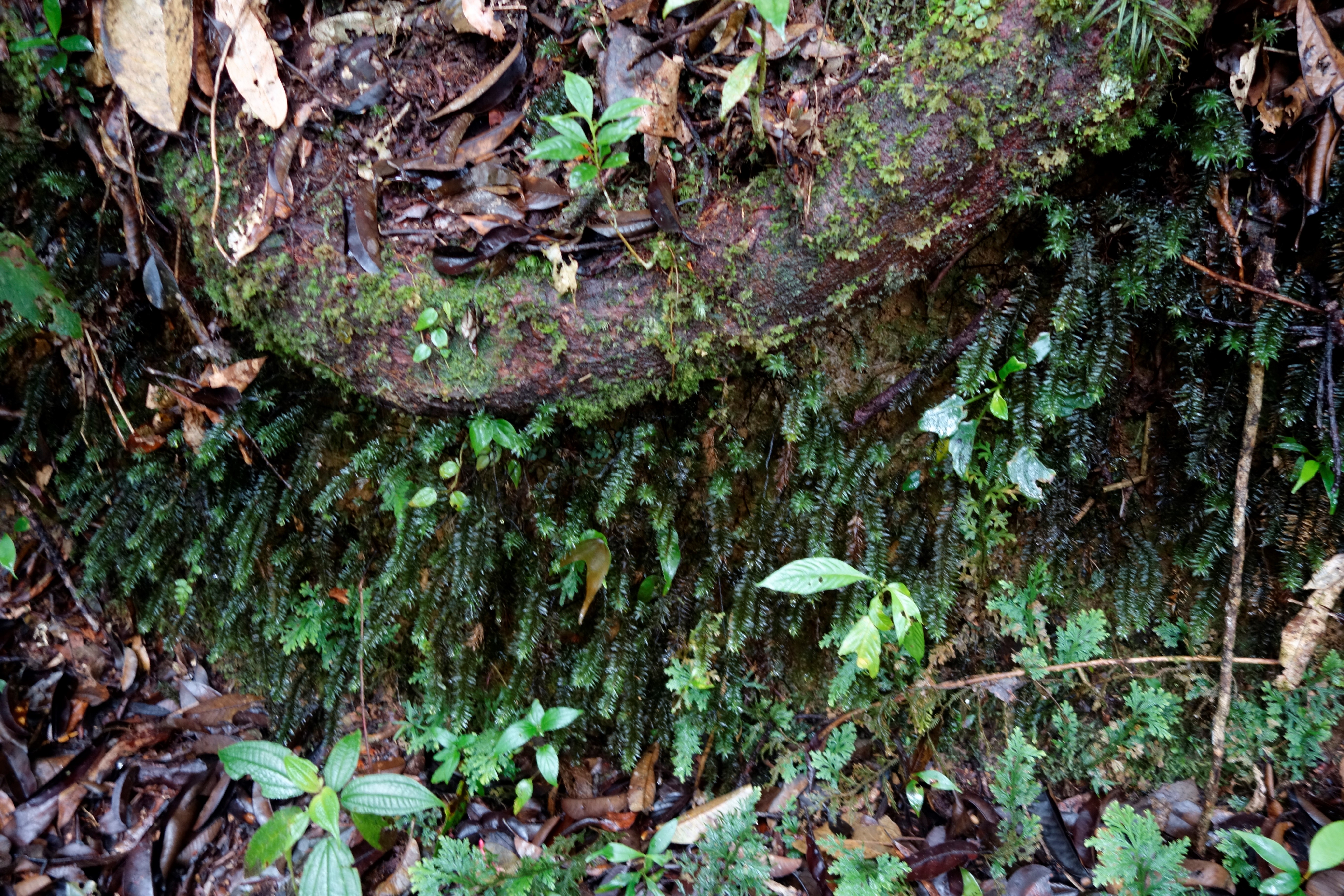 I’m just saying, this looks like an evergreen tree that got confused and started growing it’s leaves from rocks instead of branches. Apparently it’s moss, but since when does moss do that? It must be confused.

It’s not a tree. Rather, it’s moss. The fuzzy looking moss is the sexually mature phase of moss. For the whole life cycle click here.

I Think It’s a Plant 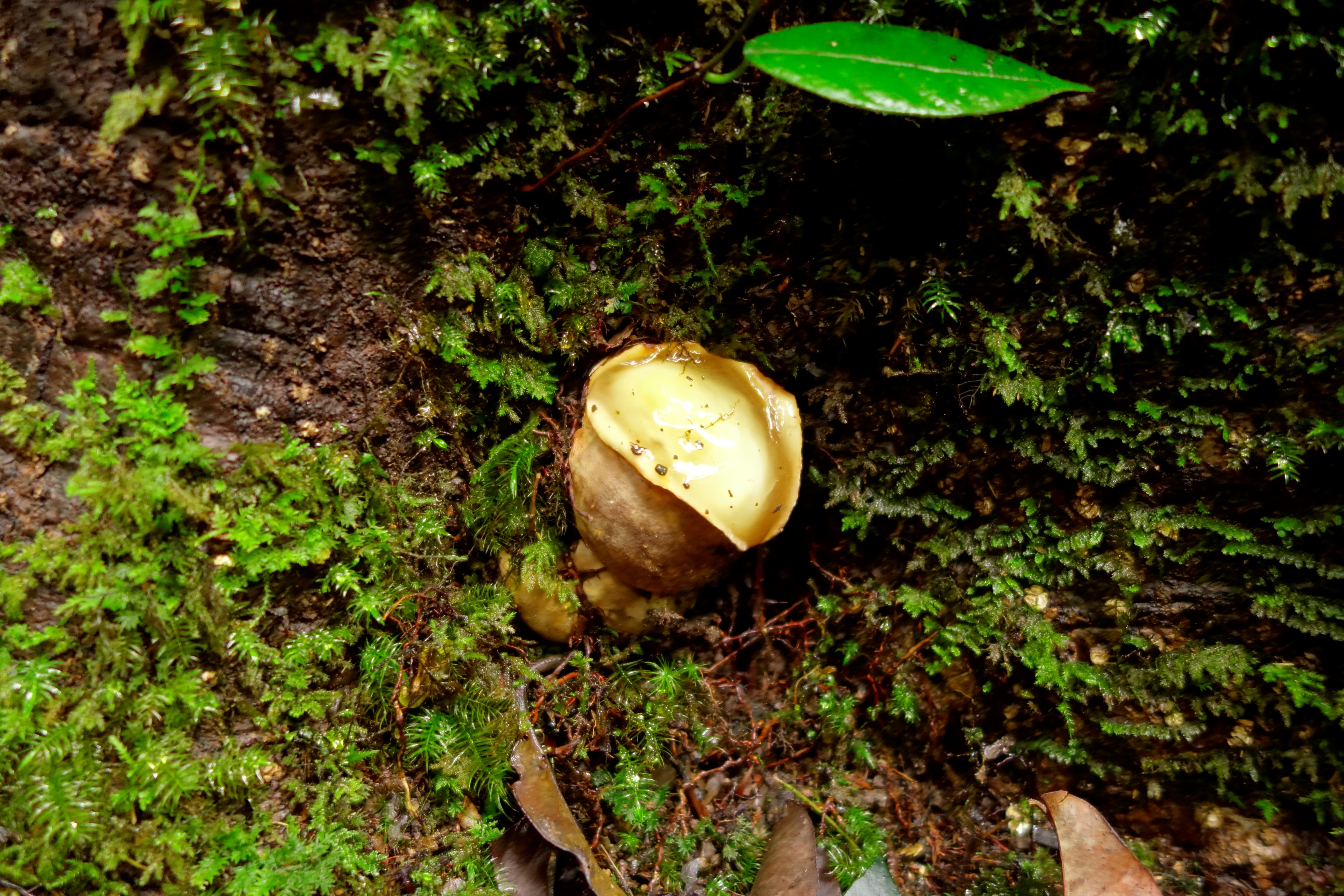 Fashioned from a squished soup bowl, this gourd has filled itself with a plantlike custard probably designed to be gelatinous. For breeding.

I will confirm that it is a fungus, but have no clue as to what species or family it belongs in. Unfortunately, I’m not a mycologist/fungi expert. But if anyone can identify it, please let us know what it is.

These are just kind of pretty. Like little angelic clouds growing from a fallen tree. It’s like a metaphor for the Judeo-Christian afterlife. You live, you die, and then you’re surrounded by white, fluffy clouds.

Definitely a mushroom. The most recognizable type of mushrooms are in the taxonomic grouping of Basidiomycota. It’s the classic looking mushroom with a cap with gills underneath and stem popping out from the earth. [5]

Those Berries From the Hunger Games 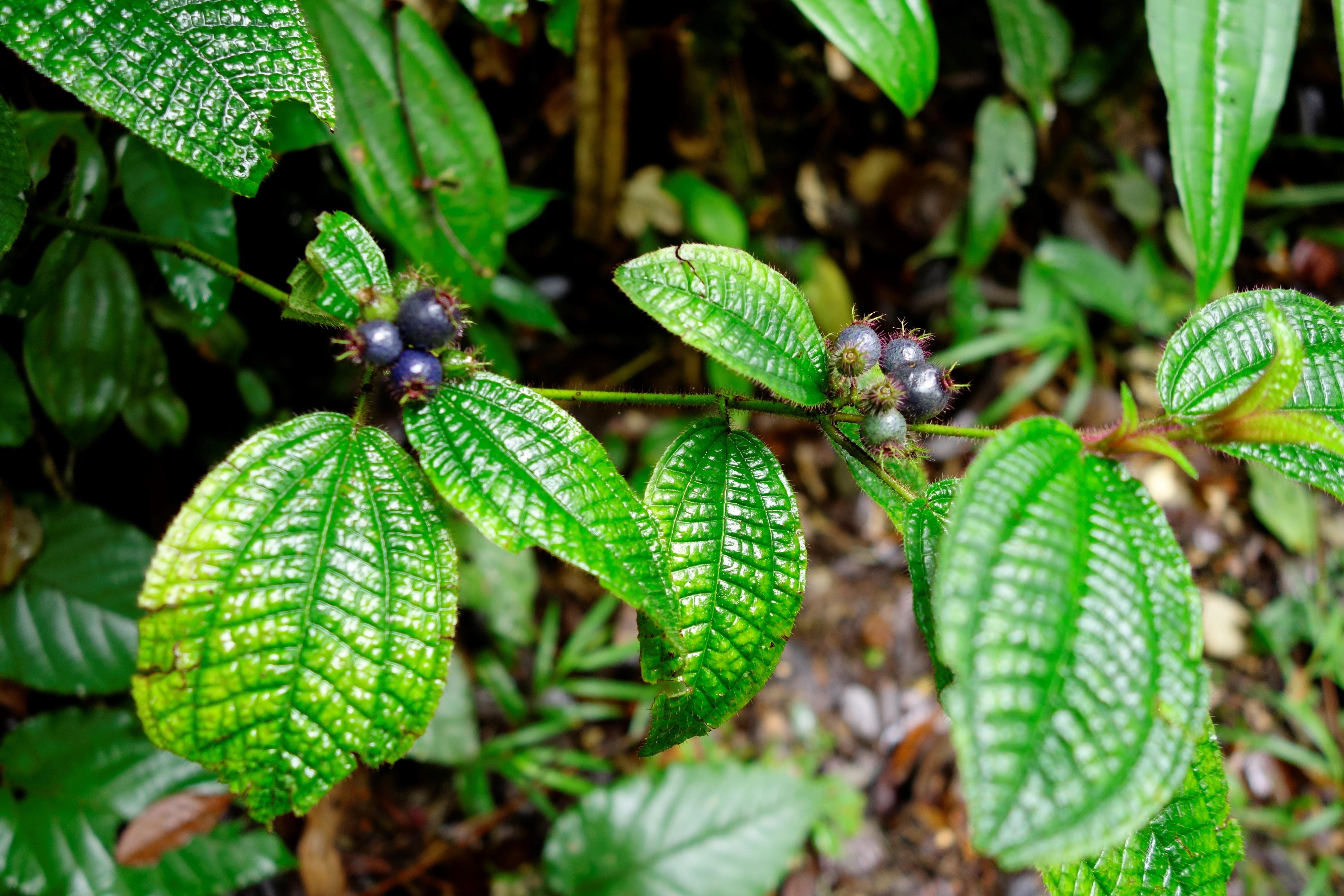 Remember when Katniss gave Peeta those berries and then the internet was like, “OMG, are those real?” Well, the answer is clearly YES, because here they are. The spikes are obviously for extra deadliness.

There is no way to tell if these berries are poisonous, but let’s not try and find out. Actually, a lot of berries that are poisonous are classically white and red in colour. These two colours, yellow and orange are often warning signals to other organisms to stay away. Using colours to warn predators is called aposematism. [6]

These berries must have been designed to sit prettily atop the mountain, complementing the snow in its pale glory. However, only the hardiest of creatures could see its loveliness, and only the hardiest could see the snow. Then, one day, a rogue monkey climbed to the top of the mountain, enduring great trials, all to see the mountain’s legendary snow. The monkey did find snow, but it also saw the snow berries. Desperate to forever remember the snow, the monkey tore a branch from the tree top and brought the seeds to the mountain’s base. “Now,” the monkey proclaimed, wagging the berries in its fist, “the whole of the forest shall know the beauty of snow!”

I like the story too much to dissect it. See the above for warning colours.

Don’t eat it, but this looks a lot like how I imagine black truffle mushrooms. It’s probably poisonous.

This isn’t a truffle because it’s growing above ground! This is a mushroom, though unfortunately I couldn’t tell you which one.

There are three main commercial types of truffles. The black truffle that is most well known is the expensive French black truffle (Tuber melanosporum) from the Périgord region of southwest France. Truffles are found underground and are round, warty, and irregular in shape. Their size varies from the size of a walnut to that of a fist [7].

As distinguished from Snow Berries, these Orange Dew Berries are orange, and wet with dew. Because jungles are wet. That’s all I’ve got on this one, but it’s really pretty!

I can’t identify these, but just don’t eat it.

I thought this looked like a teddy bear, but ink and floral. One could also say it looks like a bird. Look hard enough and that’s not all it looks like. 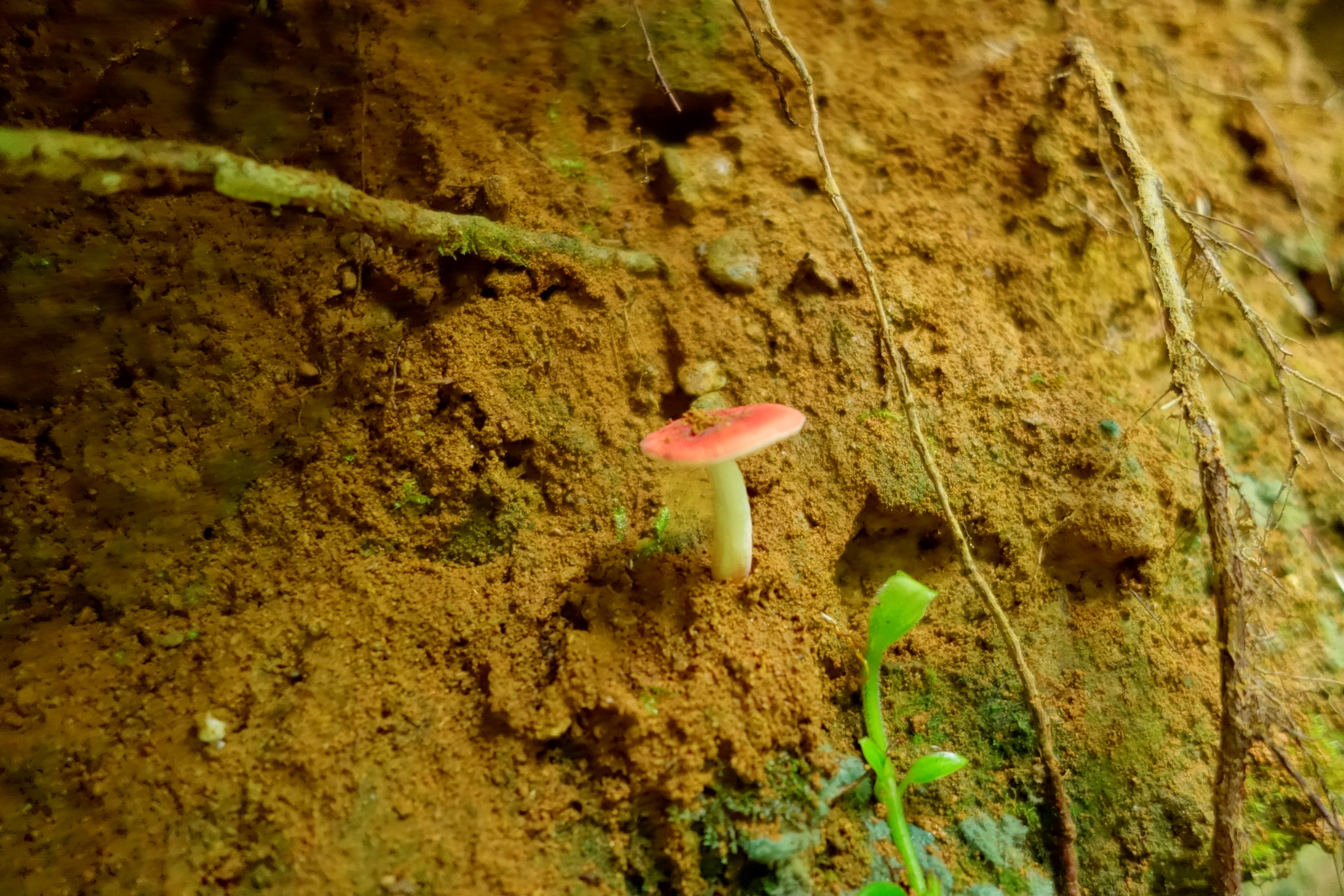 When thirty more of these pop up, you’ll be able to step in the middle and go to fairyland. If not, at least we found the mushroom archetype, the one by which all mushrooms model themselves.

The Fairy ring fungus (Marasmius oreades) body (mycelium) grows underground in a circular pattern. As it grows, it uses up the nutrients in the soil which then kills the grass growing near it. The mushroom caps that are observed are called the fruiting bodies which spead the spores of the fungus so that continues to grow and expand. The name fairy ring originates from old folk-tales. It was once believed that mushrooms growing in a circle followed the path made by fairies dancing in a ring. Cute, but not true. [8]

This is not one of those. Again, sadly, I don’t know which mushroom this is.

This could be one of a few things really. A mushroom, for example. A yellow brain. A cancerous tumour. I couldn’t tell you for sure. One thing I could tell you for sure, however, is that you sure won’t find it in my home town.

I don’t even… Probably a fungus? What is this organism?

I hope, dear reader, that you enjoyed my somewhat addled tour through the flora of Borneo’s Mount Kinabalu. This jungle is one of the earth’s most biodiverse places, and I’m so lucky to have gotten a peek. Walking through the jungle was like a tour of the weird and the wonderful, and I’m glad I went slowly enough to be wowed.

Exploring the Tropical Rainforest in Borneo was a dream come true. The best part was seeing all the biodiversity within Mount Kinabalu National Park. It was made more fun exploring it with TheGoin’ and all their lovely and humorous commentary.  Thanks again to TheGoin’ for the humorous guest post.

These organisms were identified to the best of my abilities. If anyone can ID any of these properly, please leave a comment below! Science is about collaboration.

We stayed in D’villa Rina Ria Lodge (the staff are absolutely lovely!) which was 500 meters from the National Park gate! The entry is 15 MYR/5 CAD. We completed the Liwagu trail which is the longest trail in the lower part of the park. At certain points, it goes right by a river.

We then came down the Bukit Ular Trail which was very easy but incredibly muddy because of the recent rainfall. The last trail we completed was the Kiau View Trail which was easy in difficulty. On a day where it was not cloudy, there are great vistas for photos.

[1] Grossman, D. (2017). The Strange Case of the Liana Vine and it’s Role in Global Warming. Yale Environment 360. Retrieved from: http://e360.yale.edu/features/the-strange-case-of-the-liana-vine-and-its-role-in-global-warming

[2] EdtechLens. (2015). Climbing High: the Liana Vines of the Rainforest. Retrieved from: https://www.edtechlens.com/blog/the-liana-vines-of-the-rainforest