About 45 minutes outside of central Kuala Lumpur, Malaysia are the Batu Caves. The caves are very easy to reach. There is a direct train from KL central to the Batu Caves, and the Batu Caves are the last stop on the KTM Komuter train line. It costs about a 2.60 MYR/0.81 CAD.

The Batu Caves consist of 4 limestone caves. I went to three of them. The first is the Ramayana cave which costs 5 MYR/1.58 CAD. This cave is adorned with life size statues of the epic Hindu story of the Ramayana. Inside the cave is a large stalagmite that symbolizes Shiva.

Second, is the main temple cave which has free admission. According to Lonely Planet it is one of the holiest Hindu sites in Malaysia. Marking the entrance of the cave is an enormous 43-meter statue of Lord Murugan, the Hindu god of war and victory. Be wary of cheeky long-tail macaques during the 272-step ascent as the macaques will steal personal belongings. If you’ve never encountered a monkey and want to know monkey etiquette, check out my “How to meet a monkey” post. Lastly, this is a holy site, so visitors are expected to have their legs and shoulders covered, though if you need sarongs are available at the bottom of the steps. 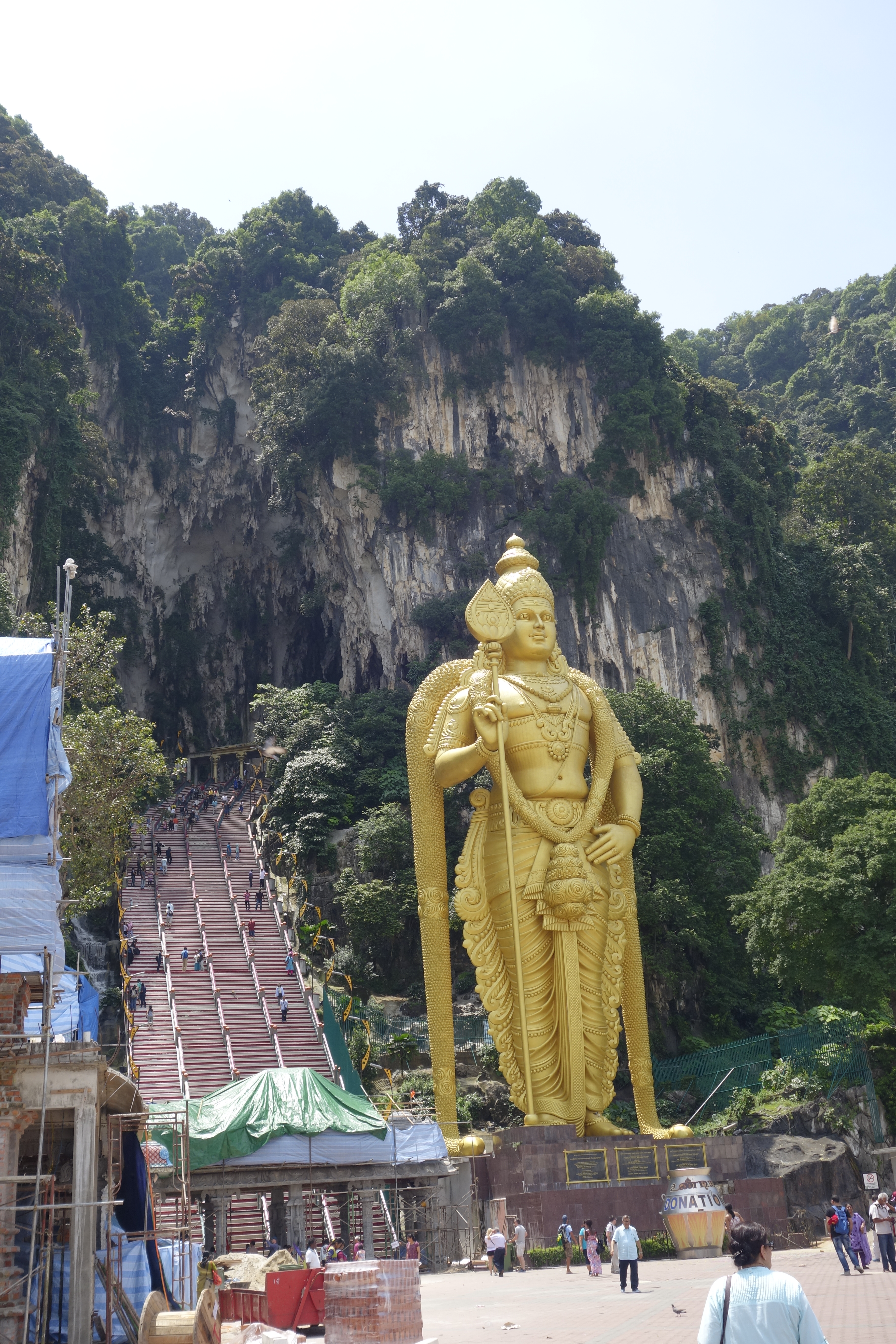 The best cave (totally not being biased here) is the Dark Cave. This cave focuses on a Guano-driven ecosystem. Guano is the scientific term for bat crap. In this cave, insect and fruit eating bats roost in the caves and poop. The poop falls and starts to pile up to several feet high and wide. Imagine stepping in that! Bacteria and fungi start to break the poop down into food and nutrients for the cave’s other inhabitants. Essentially, the bat shit is central to the existence of this special type of cave ecosystem.

Besides fruit bats and poop, this cave is full of life. There are approximately 200 identified species in the cave that are classified into three separate categories based on the amount of time that they spend in the cave:

A good example of these are the fruit bats, birds and humans.

A good example of this is a long-legged centipede.

A good example of this is a Light coloured snail.

The dark cave tour is approximately 45 minutes long and 1 kilometer in length so it’s relatively short and easy tour. Unless you have a fear of tight places, darkness, bats, poop, water, rats, insects, or spiders then this tour is for you.

If you are feeling brave, then visitors will be rewarded with the ability to observe species that are endemic to the caves as well as some beautiful stalagmites and stalactites.

At the start of the tour, the guide will hold a 10-minute brief on personal safety and cave rules. They will essentially outline how not to be a dingus in the cave. Pay attention here, the rules exist so that the ecosystem and wildlife in the cave are not disturbed.

One of the first organisms encountered is the one responsible for the poop. The fruit bat.

Fruit Bat. No bats were harmed by taking this picture, there was no flash photography permitted. The light is from the guide.

Following that encounter, the trap door spider (Liphistius batuensis) was spotted. This spider is an excellent hunter. It spins a web and waits at the center of the web with its legs on a semi-circle of “feeler lines” that alert the spider when an insect becomes entwined in a particular portion of the web. (Sorry no pictures, it was too fast!)

The next organism spotted was the Light-colored snail (Prosopeas tchehelense). They are troglobites that prefer damp, shady places and places under rocks. They are about 2 centimeters in length, so they are difficult to spot. These little snails consume guano, debris and leaves that fall into the cavern from the forest above the caves. The coolest feature they have is that they do not sense light, but they absorb calcium to build their shells.

The Spiny Millepede (Ascetophacus macdurei) is endemic to the Batu Caves. It’s not found anywhere else in the world and they are very difficult to spot because they are only 1 centimeter long! Luckily, our guide spotted one and it resembles a section of the backbone. As with the light coloured snail, it prefers a moist habitat and consumes fungi as part of its diet. This millipede is also a troglobite!

Taken from a display board. Apologies for the quality. Spiny Millipedes are tiny and the lighting was terrible for photos!

Lastly, one of the most interesting creatures of the cave was the Long-legged centipede (Thereuopoda longicornis). This centipede was much easier to spot because it grows up to 8 centimeters long and has long white and brown legs and feelers. It also has a breathing apparatus in the center of its back which helps it breathe more oxygen when chasing after insects or prey. These centipedes are Troglophiles and can live in the surrounding forest and cave.

These organisms all have different adaptations that allow them to live in a cave ecosystem. What’s great about visiting the Dark Cave is that the education tour focuses on explaining why reduction in size, blindness, changes in body appendage length and function are advantages for living in the caves. The tour also focuses on the   conservation of cave ecosystems and how humans can protect these delicate ecosystems. If visiting the Batu caves, this eco-tourism hotspot is definitely worth the smell of poop and time.

No cave inhabitants were harmed by flash photography.

Moseley, M. (2014). History of biological investigations at Batu caves, Malaysia, and consequences for the progress of tropical speleobiology: Part 1 – the 19th century. Cave and Karst Science, 41(2), 52-56.

***If any information is ever incorrect, please let me know! Science is about learning from mistakes and moving forward!***